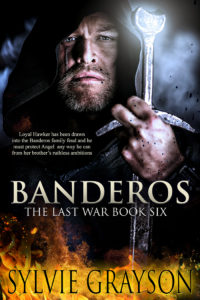 Loyal Hawker, while working as a travelling seller, has joined an elite team of undercover agents run by the Khandarken military. On a trip south, he’s approached by Angel, only daughter among the many sons of Gerwal Banderos. Gerwal is a well-known strongman who seized much of the unclaimed territory north of Adar Silva at the end of the Last War. With Emperor Carlton invading in an attempt to reclaim his Empire, danger hovers over the Banderos land, and the brothers show they’re not as united as they first appear.

During the ensuing chaos, when the the Banderos compound is beseiged. Loyal must work in the midst of deceit and betrayal to protect what is left of Angel’s heritage. Can he survive long enough to find out who’s targeting Angel and save her from her treacherous brothers?

Loyal Hawker has been drawn into the Banderos family feud and he must protect Angel any way he can from her brother’s ruthless ambitions.