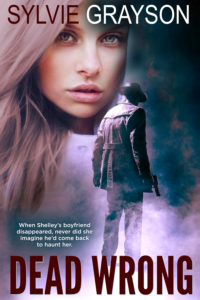 When Shelley’s boyfriend disappears, never did she imagine he would come back to haunt her.

Shelley Blake is a nine-year-old child prodigy in a sixth-grade classroom when she first meets Chris Wright. He’s the big boy in the desk behind who takes her under his protective wing.

But soon she leaves him behind to attend a different school and skip another grade. When she begins university, her classmates observe her extreme youth and walk a wide berth around her. Lonely, she meets charming Billy Zach, but new love soon turns sour. Then Billy disappears.

Years later, Chris appears again in Shelley’s life and she wonders if she can trust her growing attraction to him. She’s already dealing with her father’s worsening emphysema, her sister’s secrets, and the demands of her still fledgling business, When the police return, asking questions about Billy Zach, and more evidence is uncovered, Shelley realizes none of it will matter if she’s heading to prison for a murder she didn’t commit.

“This is a new author for me and I’m glad I found her. This follows the love story of Shelley and Chris while the events of a murder mystery unfold. The characters are solid and I was guessing “who done it” throughout the book…”