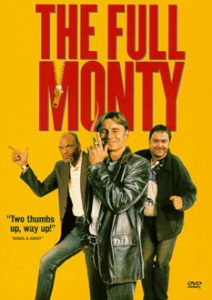 Unemployed men in the north of England are willing to try anything to scrape together a living and at the same time, uphold their dignity. The plan is to hold a fund raiser in the bar, with male strippers.

This is a compelling story on many levels, for there’s more at stake than a bit of money and having some fun. Fatigued and out of work, the men wonder if they’re still men. Dave is afraid of losing his wife, Gaz is already divorced, and their suicidal pal Lomper is living a dreary celibate life

Given the programme, the film seems oddly innocent. It’s a comedy about male full-frontal exposure, or, as one character puts it, men prancing around Sheffield with their widgers hanging out. Rife with nudging and guffawing, the steelworkers turned male strippers are less raunchy than awkward and well-meaning.

What The Full Monty is, though, is political, in a gentle way. Great characters and very good acting by Tom Wilkinson and Robert Carlyle, among others. Worth watching even now, sixteen years later.

Our cruise to Spain was exactly what we wanted — kind of like the slow boat to China. We left Fort Lauderdale, Florida on a Sunday and spent twelve days at sea. It was eight days from departure for our first stop – the Portuguese island of Madeira. By then we had begun to unwind and felt like we were finally on vacation. 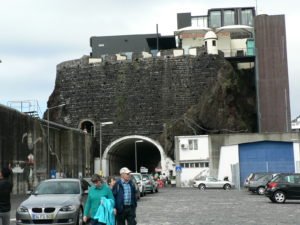 The ancient barricade wall at Funchal 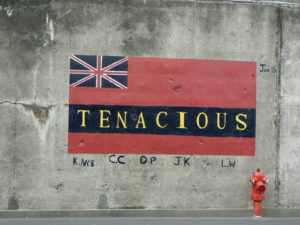 Painted on the barricade

The capital of Madeira is Funchal and that is where our ship docked. What a beautiful place. The trip up to the peak of the mountain in a taxi allowed us to stop at some spectacular gardens. 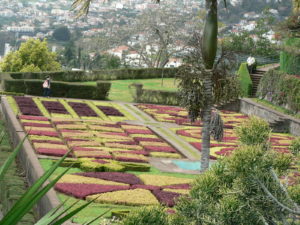 Then we rode the cable-car back down to the city. It was hair-raising but worth it for the fabulous views. Old buildings, beautiful churches, tiny gardens clinging to minute spaces on the steep hillside. Definitely a must see. 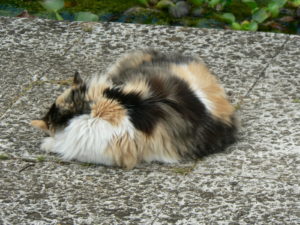 A resident of the gardens

We had a fabulous trip, starting out from Vancouver airport. We had a stop in Montreal, then straight down to Fort Lauderdale. We were lucky enough to stay in Florida for five days. It was lovely, we visited friends in Fort Myers on the western side of the state, who live in a gated community — quite different from our sprawling landscape. Then we travelled over to Cayo Costa which is west of Fort Myers to visit some Canadian friends who spend the winter down there on their boat — again very different from our ability to take up as much room as we need. It was beautiful, we saw manatees, a gorgeous lagoon and were fed a delicious lunch. 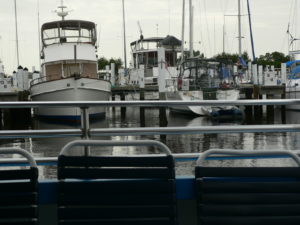 The ferry taking us to Cayo Costa 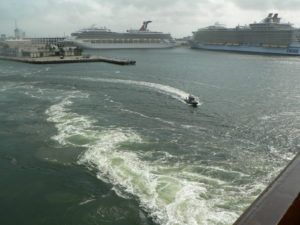 The bay of Cayo Costa

When we sadly left our friends to return to Fort Lauderdale, we were ready to board our cruise ship for a trip across the Atlantic. Never imagined we would ever do this, but it was fascinating. More to come. 🙂

I attended a writing seminar taught by Robert Dugoni. He’s a bestselling author of police detective mysteries and about 35 people arrived from all over Vancouver Island to hear what he had to say, which turned out to be quite a lot. And it was not only interesting but useful information.

I’ve written a few books now but am still learning and I learned even more on Saturday. Here’s a sampling . When  creating a character –

But the most compelling part of the workshop was the ending. Dugoni reminded us to enjoy writing, and not to get so caught up in the marketing, readings, production of material that we lose the fun of it. Good words to write by.

To learn more about Robert Dugoni, check out his website at http://www.robertdugoni.com/ 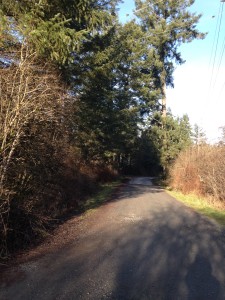 There are a lot of biking and walking trails where I live on Vancouver Island. They’re well used, mostly gravel although some lengths are dirt and lead through streams and over tangled tree roots. The trails lead past farm land, up steep hills, through dense forest and down old train routes.

When you’re riding a bicycle and approach people who are walking ahead in the same direction, the practice is to call out – “passing on your left”. It’s the polite way of giving notice that you’re overcoming walkers and to let them know you are there if they don’t hear you approach.

This morning as I walked along, I thought of how my writing is going. I’m not passing anyone these days. It’s been slow for a while now and will probably stay that way for a few more months. Life has happened to me, and it will take some time to sort it out, recover and regain my equilibrium. So it is others who are calling out to me – “passing on the left”.

But you see, I don’t mind that. Those who call out give hope to the rest of us who are moving at a slower pace. It’s as if they say – “I’m blazing the trail for you. Don’t give up hope, just keep on and soon you’ll see where we are going.”

Thank you everyone for the call out.