Summer is here. The clouds have finally cleared in our valley and the sun is ripening the tomatoes and the raspberries. So much to do, so little time 😊

Summer makes me think of the story Moon Shine. Julia is raising her children during the 1930s depression, and her garden is very important to their food supply. 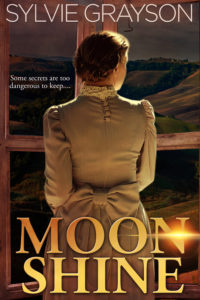 “Oh, Wagsy, please stop!” Julia stripped off her canvas gloves as she walked up the grassy path from the garden. The collie studiously ignored her, continuing to bark as he pawed at the entrance to the root cellar. He stopped and growled low in his throat, then threw himself at the door, attacking it ferociously with his claws. “What’s got you so excited?” She paused to push her hair off her hot forehead. “Is your ball in there?”

“I don’t think so, Mummy,” seven-year old Maggie contributed from the side yard. “He did that this morning, too, but his ball is over by the porch. I was throwing it for him before.”

As Julia drew near, Wagsy turned to swish his tail at her, but immediately went back to growling and digging at the ground in front of the root cellar door.

It was a beautiful clear sunny afternoon, end of summer weather with clear skies and less intense heat. The garden was producing well, and a lot of it was already at the stage to be gathered in, for storage or canning. Julia had just finished digging the onions, piling them in baskets and dragging them into the shade to be braided and hung in the root cellar to air dry. Maggie liked to help with the braiding. She carefully pleated the onion tops and tied the ends with string, her tongue pushed to the side of her mouth in concentration. Years ago, when he’d first dug the cellar, Julia’s husband Stephen installed a rope that ran along the roof like a clothesline to hang them from.

Julia swallowed a lump in her throat at the thought of how she missed him, and pushed her hat up with the back of her hand. She looked at the dog, and sighed. “Well, there must be something in there, if he was barking this morning. Maybe we had better open it up and take a look.” Dropping a basket of onions on the ground, she put her hands on her hips. “We should be airing it out anyway, before we have to start stocking it up for fall. It’s probably a rat, best get it out or it’ll eat our winter food.”

Then she hesitated. “Oh, I see, the bar has been taken from across the door.” That certainly put a different light on things. It meant someone, not something, had meddled with the door. There could be someone in there even as she stood here in indecision. She turned to her young daughter. “Maggie, I want you to go in the house. Where is Jims?”

Maggie squinted at her against the glare of the sun. “He’s on the porch, right there.” She pointed to her younger brother who was on his knees dragging his wooden fire engine with its two red-painted cars across the boards of the verandah.

“Then get Jims and go in the house. Tell him this is our Plan, our Special Plan.” She gave Maggie a pointed look, and watched her young mouth fall open. Her fearful gaze darted to the door of the root cellar, and Julia put her finger to her lips. “Remember our Plan?”

Maggie nodded her head exaggeratedly and darted away, looking nervously back over her shoulder as she ran.

After Stephen died, Julia knew things had changed forever. No longer could she rely on the strength of her husband to handle events as they occurred. Now everything was up to her, whether it was decisions or actions. One of the things she worried most about was their isolation, especially after so many men became unemployed and began wandering the roads looking for work or food.

By the end of 1930, she’d decided more vigilance was needed. The house was only a couple of miles from town, but a young woman and her two small children were pretty isolated by those miles. The few houses they passed on their way into Creston were set far apart along the North Road. Since Stephen’s death, she’d come up with the Special Plan. She trained the kids in the Plan often, reminding herself to go over it regularly to enforce it in their minds. It became a game, but she knew that the more they played, the more likely her children would remember the important details. It had been as much for her own peace of mind as any thought of needing to protect them. But now, suddenly, it was a game no longer.

The first step of the Plan was for the children to go into the house and lock the door. Julia had hidden a couple of weapons outside in case they were needed, in places where she hoped they would be close at hand if she was caught unprepared. There was the pitchfork in the barn, and a few other tools she’d identified, items that could be used to make her feel more empowered while confronting an intruder. Ever since the economy crashed, lean, hard-looking men had begun to wander the byways, their skin a deep nut-brown on hands and face.

As the years went on, the men were thinner, browner, their clothing more threadbare. They didn’t often come right into her yard, usually just walking by in an effort to get to the next town. But when they did stop at her gate, she fed them and sent them on their way. They were, as a group, generally very respectful and especially careful around the children. They were often fascinated by them, liking to sit and watch them play. This both touched Julia’s heart, and scared her in equal measure. They were likely just lonely for their own families, but she didn’t want anyone to get too attached to her children.

She checked to make sure the kids were in the house, hopefully with the door locked. Then she found the sharpened stick that lay in the grass at the side of the root cellar, and heaved the first flat door up and open. Wagsy leaped past her and into the gloom, growling low. Julia pulled up the other door to let in more light and stood uncertainly on the top step, the staff in her hand pointed down into the dark. The dog barked louder, bouncing on his back legs. Julia could hear a voice, it sounded small and frightened.

5 stars, Amazon review, Hooked. I loved the story and characters, they were all rich and well developed. Could not put this book down and must say, I am now a fan. 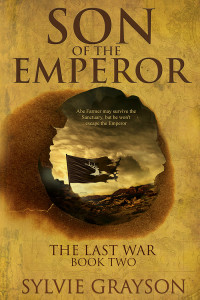 Son of the Emperor

Abe Farmer may survive the Sanctuary, but he won’t escape the Emperor

Hunted by her stepmother, Julianne Adjudicator flees to the north of Khandarken and is welcomed into the Sanctuary, a place of refuge for women in a rough world where the dispossessed of The Last War rove the wilds of the countryside. But even there, she finds chaos and betrayal.

Abe Farmer seeks help for his badly wounded bodyguard at the Sanctuary but ends up leaving under cover of darkness with young Julianne in tow when he discovers the fate that awaits her there. Soon the trio attracts the deadly attentions of the New Emperor.

Can they reach the Catastrophic Ocean and safety before disaster strikes?

My new novel just went live this week on amazon.com. Click on the cover to connect. Hope you like it.

“When Emily Drury takes a job as legal counsel for an import-export company, she doesn’t make the decision lightly. She needs to get away to someplace safe.

Joe Tanner counts himself lucky. He’s charmed a successful big city lawyer into heading up the legal department of his rapidly expanding business.

But why would a beautiful woman who could easily make partner in the high profile company where she worked, give it all up to come to a place like Bonnie? A mystery surrounds her arrival that wraps them both in ever tightening tentacles. As Joe realizes she has become essential to his happiness, his first reaction is to protect her. But he doesn’t know the whole story.

Can Emily trust him enough to divulge her secret? Will he learn what he needs to know in time to stop the avalanche that’s gaining speed as it races down the hill toward her?”