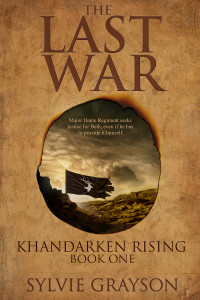 The Emperor has been defeated. New countries have arisen from the ashes of the old Empire. The citizens swear they will never need to fight again after that long and painful war.

Bethlehem Farmer is helping her brother Abram run Farmer Holdings in south Khandarken after their father died in the final battles. She is looking after the dispossessed, keeping the farm productive and the talc mine working in the hills behind their land. But when Abram takes a trip with Uncle Jade into the northern territory and disappears without a trace, she’s left on her own. Suddenly things are not what they seem and no one can be trusted.

Major Dante Regiment is sent by his father, the General of Khandarken, to find out what the situation is at Farmer Holdings. What he sees shakes him to the core and fuels his grim determination to protect Bethlehem at all cost, even with his life.

Ms Grayson has created a fascinating new world with a lot of the same old problems. Sci fi and fantasy rolled into one with a sure hand and enormous imagination.