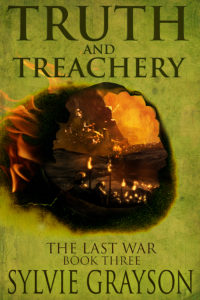 When Emperor Carlton makes an offer, can Cownden Lanser refuse? Lanser has his own ambitions and Carlton may be offering everything he’s dreamed of.

The Young Emperor has been backed into a corner. He holds a bit of land in Legitamia where he marshals his troops, but the skirmishes they’ve launched to expand his empire have had limited success. Now, his ambitions are aimed at overthrowing everything Khandarken has cobbled together since the Last War.

Cownden Lanser, Chief Constable of Khandarken, is a private man with a close connection to the Old Empire that he doesn’t divulge to anyone. Although he’s dedicated to his position, things are not what they seem in the rank and file of the police.

Selanna Nettles is a sookie, trained in Legitamia but working near her family in the Western Territory of Khandarken, healing the injured mine workers and the dispossessed. But her life takes a startling turn when Chief Cownden Lanser hires her to attend a set of high-level meetings in Gilsigg.

When these three meet up in Legitamia, the result is explosive. Not just for them but for the future of Khandarken. The Emperor makes Cownden an offer that might be everything he’s secretly dreamed of. How can he refuse?