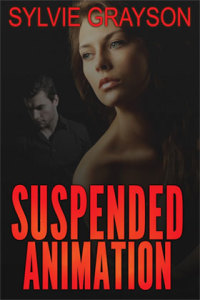 Be careful what you go after…

Katy Dalton’s job has evaporated and she needs her money back fast, the money her friend Bruno Morelli has loaned to the businessman who owns Rome Trucking. When she puts the pressure on Bruno to return it, he disappears and bad things start to happen all around her.

Brett Rome has a career in hockey and the last thing he wants to do is leave a promising opportunity as coach to return home and run his father’s failing trucking company. But father is ill and Brett is stuck with trying to prop up a company with big new trucks and a towering overdraft. Then Katy shows up demanding her money. What more can go wrong?

Here is an excerpt from this book

Brett Rome stood in the dressing room of the Victoria hockey team and pulled the jersey over his head. He sat down to lace his skates as the coach gave them the talk. He listened carefully. This was a new team, the guys had only been playing together for a couple of years. And he was the newest member.

He hadn’t expected to play hockey here. He’d come to town because his father was ill. He thought he’d be in Victoria for a few weeks, do what he could to help out till Paddy got back on his feet. Two months later, angry and frustrated, Brett felt tied to this place and to his father’s company, Rome Trucking.

Tonight he was determined to get out on the ice and show some substance. Excited as always before a game, he was wired, tight and ready to play. Glancing at his friend beside him, they exchanged a grin. The fact that Jerome had been taken on to the team just made it that much better.

They filed down the tunnel and out onto the ice. The crowd looked big and they were loud, the stands full. The shouting started the minute they emerged from the dressing room and escalated with bullhorns, clappers and screaming enough to deafen them. But once play started he barely heard it.

Coach sent him out in the middle of the first period when one of their defence was winded. He climbed out of the box and skated onto the ice to take his place. It felt terrific.

Here, he knew exactly what was expected of him, for the first time since his last game with the Vancouver team which seemed like eons ago. There was no guessing, no trying to figure it out on the fly, no catching up from behind. Just get into position, always move into position and be ready when the break came. Because sooner or later the break always came. What he did with it showed what kind of hockey player he was today.

The end of the hard fought second period showed them up three goals to two over Seattle. Brett trundled back into the dressing room with the rest of the players and sat on a bench, breathing heavily, wiping sweat and listening to the pep talk.

Now Coach focussed on maintaining the lead. “Be protective,” he said. “Be proactive. Don’t let the other guys in for another goal and do your best to score once more, because a lead of two is so much better than a lead of one.” A burst of laughter erupted among the players.

“It’s early in the season, fellas, but we don’t want to give anything away. Hang onto your lead, that’s what I want you to do.”

In the third period play was faster. Seattle poured on the coals trying to tie up the game. Brett seemed to be in line to take most of the blows from one of their power forwards. When he stepped out onto the ice again, the enforcer came straight for him. Brett saw him come in low and to his side and realized he was about to get laced straight into his injured knee. He stopped short and managed to deke out of the way, going down in a controlled slide and holding his stick steady as the Seattle player’s skates came closer. He took a header straight into the boards but brought his opponent down with him. Before he could get up, the enforcer attacked.

Suddenly Brett was swamped with an overwhelming tidal wave of anger. Scrambling madly to his feet, he threw his full force into the fight. His helmet was gone, fists and bodies were flying as his team mates dove into the action. He launched himself at his opponent, the jersey clutched in a death grip, his other fist pounding.

The first hit landed to the side of his face and instantly he felt a wild rage wash over him out of all proportion to the fight he was in. That wave nearly felled him, almost knocked him to his knees. He staggered back to his feet before it swallowed him whole.

He hit back and then again, his arms and fists lashing out wildly, pumping like pistons. The feelings swelled and boiled. His girlfriend Marilyn had finished off their two-year relationship by simply bringing her new lover into their bedroom. It had knocked him flat on his face with humiliation. He seethed with resentment, he roiled with fury, he exploded with vicious power.

Wildly he hit out again, one fist then the other and exulted when one struck home with a jarring blow that he felt all the way to his shoulder.

That was for Paddy. His father had suckered him into running his company when Brett had other plans. He was running the crew and the trucks with no authority, just a lackey to pull the old man out of a tight spot. Paddy hadn’t bothered to explain why the company was operating in the red, apparently ignoring it in the hope that Brett would deal with it.

He took one to the mouth and his head snapped back. His mouth guard popped out and went flying. Roaring like an elephant, he charged back into the fray, dealing another blow that knocked his opponent reeling backward.

That was for Dancy. Paddy’s girlfriend had treated him like a piece of meat, a man without morals in his own father’s house, a man with no self-respect.

He pounded, he bellowed, something tore loose inside him and rattled around roaring to be set free, demanding to take on the whole team, needing to prove himself worthy.

Hands hauled on his uniform but the adrenaline surged. Someone grabbed his left arm and his right lashed out, until he was caught round the neck from behind. By the time it was over he was flat on his face on the ice with a referee and two of his own team members on top of him.

The ref ordered him off the ice, suspended for the rest of the game. He slogged back to the change room to shower. But not before Coach sent the medic in. He was swabbed with alcohol, stitched up here and there, then ice packs applied. By the time he was out of his uniform the adrenaline rush was over and he was shaking. Grateful to be showered and changed, he fumbled to button his shirt with unsteady fingers as the rest of the team filed in.

They’d won the game, hanging onto their one goal lead. As the noise level rose to a dull roar in the dressing room, Jerome leaned down to speak urgently in his ear. “What the hell, Brett. That isn’t your usual game.”

Then Coach sat down beside him and gave him a tight look. “So, what happened out there?”

“Uh, it was stupid.” He took a deep breath, rubbing a shaky hand down his still sweating face. “I just saw him coming and knew that he was going to hurt my bad knee. I overreacted.”

Coach nodded abruptly. “Come and see me tomorrow, call me in the morning.”

“Okay, Coach.” Some of the team eyed him guardedly as they changed but most grinned and gave him the thumbs up. He waited for Jerome and they went off with a couple of the other players to unwind over a beer.

But Brett didn’t stay long. He could feel the rage still sloshing in his gut, weaving back and forth like a sea dragon seeking to escape. It made him queasy. He was back at his father’s house by midnight, uncertain how he felt, uncertain if he could even sleep.

Ten minutes later he was out like a light. But not before he’d locked his bedroom door against Dancy.