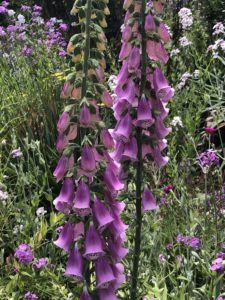 Here are a couple of other wildflowers that thrive in my garden. This is foxglove. We had a lot of fun with them as kids, stripping the flowers to put one on the tip of each finger. Then there are the lupines. 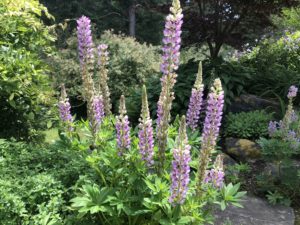 Funny that nature has a similar colour palette for all three of phlox, lupine and foxglove.  This vine is a honeysuckle. It was my mother’s plant, and years ago I took pieces off it to plant in my own garden. I’ve moved it a few times now, but it is one sturdy plant. The hummingbirds love it, it covers the arbour into the garden nicely, keeping it shady in the heat of summer. 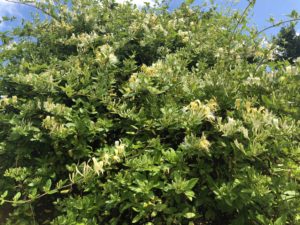 Let me know what flourishes in your flower bed.

Things are still popping in my garden. This flower is known as phlox, also called Sweet William. It grows wild where I live, but is a wonderful contribution to my garden. I let a lot of the stalks stay until they dry, then I shake them out over the ground to ensure a nice crop of volunteers the next year. The thing is, it blooms after the rhodos and azaleas, and before the dahlias, so is a great contribution. 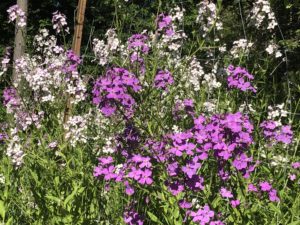 Here is a beautiful swallowtail butterfly feeding on the phlox flowers. 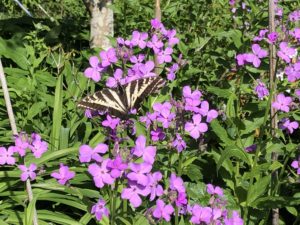 I will announce the winners of the book Dead Wrong very soon.

I’ve been picking blackberries the last few weeks. They are the most aggressive plant imaginable. There is a local blackberry on Vancouver Island with small leaves and a thin vine that creeps along the ground in undisturbed forest areas. The berries are small and their season is short.

Then there are the Himalayan blackberries, with thick tough vines and huge thorns. We were picking the Himalayans. They have a long season, stretching into early October depending on the weather, and the berries are huge. The bushes were on the other side of a ditch, so we backed the truck across the ditch and stood on the flatbed to pick. I still got clawed and scratched but they are so plentiful we filled three buckets. 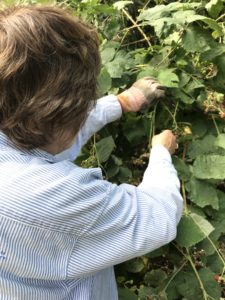 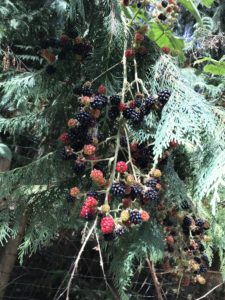 I learned how to pick these berries from the mother of a friend. She always went out prepared. She wore heavy jeans, tucked into socks, with heavy boots and thick soles. That way she could use her foot to flatten the vines and move forward into the jungle. She wore a cotton shirt, with a long sleeved shirt over so the thorns could grab the top shirt and she wouldn’t get clawed. She had a belt around her waist that was threaded through the handle of her berry bucket. Then she wore one leather glove to grab the vine and left her other hand free for picking. She also carried a wire coat hanger to hook the vines and pull them forward if needed.

I lived on Vancouver Island until my eleventh birthday. Then my family moved to the North Peace area. Time passed, we moved on again to the Kootenays, and it was years later that I decided to return to Victoria to attend university. It was early September, and I was waiting at a bus stop to take me up to the university campus for the first time. There was a blackberry bush behind the bench, and I leaned over and picked a few berries. They tasted like home. I had forgotten how good they were, but those few berries reminded me. I’ve lived on the island ever since.

What wild fruit do you pick near your home?

My garden is going crazy. I have a couple of English cucumber plants and they are producing like mad. We are trying to eat one a day just so it doesn’t get too far ahead of us, and we give the rest away. Luckily the tomato plants are just as busy, so we’ve had a lot of Greek salads! 🙂 Then there are the squash plants, too many to count.

Making a batch of Squash Soup today. I got the recipe from the world famous Butchart Gardens near Victoria. It always turns out fabulous – squash, apple, carrot, celery, onion, a stick of cinnamon, not to mention a few tablespoons of curry paste. Just put it through the food processor. 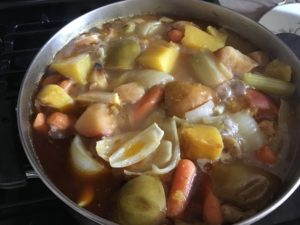 What are you harvesting from your garden?

My garden has gone crazy with the heat, now that it has finally arrived. Here are some tall lovelies that shot up. We had quite a discussion about what they were – larkspur? delphinium? Etc. 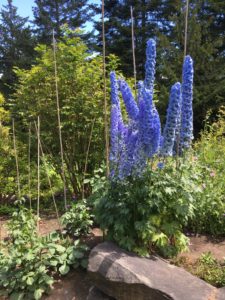 Turns out a larkspur is a delphinium, so we were all right! 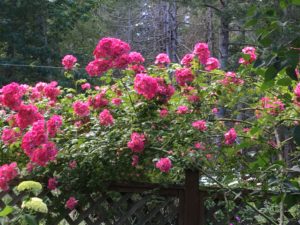 The climbing rose is healthy. This is a rose that I got from my mother years ago, took some shoots and rooted them. It doesn’t have much scent but is the only rose that will grow in my new place, so I’m grateful.

Still waiting for the cover for Dead Wrong. It’s been a struggle, partly because I started off wrong with my ideas for it, and then I got sidetracked with life. Why does that happen? 😊 So my poor designer was left in limbo, but I think we are very close. Should be able to reveal it soon. Fingers crossed!